Take one discarded and once much loved On-One Inbred with a seized seat post. Apply some A'Level chemistry grade knowledge. Remove the last bit of stumpy post with a big screw driver. Build it up and ride! 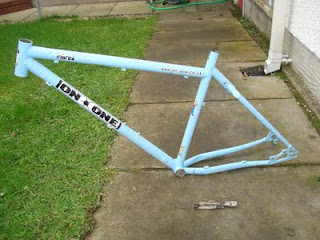 
For anyone interested in the specifics. The frame is steel and had an aluminium seat post left in it for a very long time. Steel and Alu will bond over time. Normally brute force can free the bond and the frame can be saved but occasionally it just won't shift. The previous owner had cut the seat post about 1/4" above the top of the seat tube with the intention of sawing down the length of it down the clamp gap on the seat tube, then grabbing and squeezing the protruding post with a vice before twisting and pulling. The theory is that the post will collapse in on itself and come free. Unfortunately it did not. 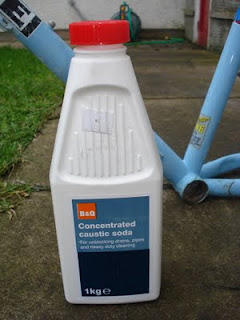 However, Caustic soda will dissolve pretty much anything, including your hands if you are silly enough to handle it. It does not react with steel though. Very handy. Stick a plug of blu tac up inside the bottom bracket shell to seal the seat tube up as a glorified container. Mix your caustic soda to the water, never the other way around. Pour it in the top of the seat tube and stand back. The reaction is impressively violent and will go on for many hours. But at the start be ready to rinse down the volcano of liquid from the frames paint work if you want it to make it through the ordeal. Also, do this outside if you can, a lot of nitrogen is produced. Better to let it away rather than collect it inside in a nice big bubble.

Use Protection kids and dont do anything stupid!
Posted by Team Maxbo at 09:02